Three angles from which to view a researchers’ practice (A, B, C) and three kinds of formulation of each angle (1, 2, 3), which define the nine combinations (A1-C3) discussed in the last chapter of my book, Unruly Complexity: Ecology, Interpretation, Engagement (U. Chicago Press, 2005) and introduced in two previous posts.

My book, Unruly Complexity: Ecology, Interpretation, Engagement (Taylor 2005), considers three angles—like facets of a crystal—from which to view the practice of researchers (as introduced in the previous post).
END_OF_DOCUMENT_TOKEN_TO_BE_REPLACED

Attention to practice—to what scientists actually do—was a key development in the interpretation of science during the 1980s.  This development is covered well by the collection of essays, Science as Practice and Culture (Pickering 1992a), and in the editor’s introduction (Pickering 1992b).  Pickering adds the term culture to denote the “field of resources that practice operates in and on” (1992b, 2), and stresses the importance of considering the temporal aspect of practice—the process of making science as against the products.  Latour (1994) also explores a process metaphysics for interpretation of science, which follows the philosopher Whitehead.  Even though the reconstructions of the Kerang Farm study and the other case in Taylor (2005, Chapter 4) do not trace the course over time of the researchers’ work, they share the emphasis on process and scientific practice.  Heterogeneous construction might be read as Pickering’s (1993) “mangle” and “impure dynamics,” and the imagination of scientists as his “modeling.”  However, although Pickering shares many of the concepts outlined in the previous post on construction of science, he theorizes practice mostly in terms of experimental practice (with one foray into conceptual practice).  In an effort to distance himself from previous work that focused on sociological explanations of scientific knowledge, he diminishes the role of wider social resources and avoids discussion of causes.  For Pickering, it is mostly because scientists tinker with tangible objects, whose resistance requires accommodation, that their goals and interests are subject to ongoing revision.  Studies of practice in this sense are reviewed by Golinski (1990).  In contrast, mathematical models or representations produced by researchers form the entry points in Taylor (2005, Chapter 4); intepreting them motivates my analyses.  I also remain interested in causes and explanation that span different domains of social practice.

Lynch (1993) presents a strong challenge to the aspiration of explaining science.  From an ethnomethodological perspective, he argues that sociological analysts cannot secure a vantage point that enables them to remain outside the vernacular language and epistemic commitments of the communities studied.  How particular results stand with respect to prior results, how a laboratory’s findings contribute to the disciplines, and so on are settled for all practical purposes by locally organized, embodied practices of handling equipment, making experiments work, presenting arguments in texts or demonstrations, and so on.  When this is observed carefully—ethnomethodologically—it bears little relation to practitioners’ accounts of what happened and why.  By implication, interpreters of science can do no better.

My response to this challenge is to note that descriptions are not explanatorily innocent and ethnomethodological descriptions privilege explanations of the action of individual agents that assume extra-local or trans-local considerations have no effect on their mental calculating or imagining.  It is not clear that this lack of effect—especially on unconscious mental processes and embodied physical responses—could be demonstrated ethnomethodologically.  Interrogating individuals about their motivations and memories, and asking them to display them to audiences would not resolve the question because practitioners, as Lynch argues, are not privileged explainers of their own practice.

Turner (1994) strongly criticizes the project of interpreting science in terms of practice, but his objection is not to interpreters looking at what scientists do, but to their explaining knowledge by invoking hidden, but shared premises or knowledge embodied in practices or routines.  This objection does not seem pertinent to interpretations of knowledge-making that tease out multiple, practical considerations.

Pickering, A. (Ed.) (1992a). Science as Practice and Culture. Chicago: University of Chicago Press.

—— (1992b). “From science as knowledge to science as practice,” in A. Pickering (Ed.), Science as Practice and Culture. Chicago: University of Chicago Press, 1-8.

What if everything is already unruly complexity?

1st Answer (after defining and illustrating the concept): There’s a qualitative difference in analysis of causes & implications
This leads to Question 2: … implications for whom?

Answer to Q2: Researcher in dialogue between models & phenomena
but this is embedded in dialogue with diverse social agents to establish significant knowledge & subject to ongoing restructuring.

This leads to Question 3: What is the role of the researcher in this dual dialogue? 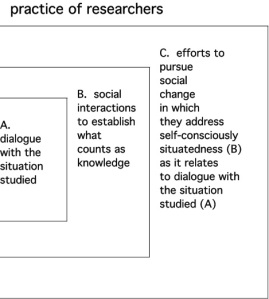 (Notice that, as in the two islands scenario, we have a sequence of 1. simple well-bounded system (researchers in dialogue [using evidence & models] with real world); 2. simple themes, opening things up (researchers are also social beings, so there must be a dialogue with funders, audience, technicians, etc.—indeed, researchers must always already be aware of this); 3. differentiated, locally particular accounts (how the dual dialogue plays out in particular instances—and how researchers could more self-consciously address the dual dialogues).

What if everything is already unruly complexity? Putting together the ideas above and in the previous post implies that anyone thinking that faces
“the challenge…
of using their knowledge, themes, and other awareness of
complex situations and situatedness
to contribute to a culture of participatory restructuring
of the distributed conditions of knowledge-making and social change.”[*]

That challenge cannot be addressed alone,  nor primarily through our accounts of the world.

* Page 203 in Taylor, P.J. (2005) Unruly Complexity: Ecology, Interpretation, Engagement (U. Chicago Press).  The book as a whole elaborates the sequence of thinking in these two posts.