The Truth is the Whole: Essays in Honor of Richard Levins is now available as a 300-page paperback through online retailers in North America, Europe, and Australia.
END_OF_DOCUMENT_TOKEN_TO_BE_REPLACED

“Biology as Politics: The Direct and Indirect Effects of Lewontin and Levins”

a) The essence of the project is…
Promoting a form of science criticism that is engaged with the political dimensions of biology at the same time as making sense of my limited impact in this area since I wrote an essay review of the previous L&L collection 25 years earlier (when I was finishing my PhD with them).

“‘Science criticism’, unlike art and literary criticism, is not a widely accepted enterprise in our culture, but that would be an apt label for the essays of Lewontin and Levins reviewed here.”  L&L belong to a category of scientists who “have tried to express their dual commitments—to science and to political change.”

b) The reason(s) I took this road is (are)…
My approach to science combines a personal proclivity to learn by probing what others had taken as given + formation as a undergraduate student in the early 1970s at an Australian university that was known for its political, environmental, and counter-cultural activism.  This combination led to my wanting “to shape… scientific practices and products self-consciously so as to contribute to transforming the dominant structure of social and environmental relations.” (from Unruly Complexity: Ecology, Interpretation, Engagement, 2005)

This continues: “In retrospect, I would read in the broad terms of the critique of science an overoptimistic assessment of the potential, on one hand, for the social movements of the 1960s and 70s to bring about radical restructuring of social relations and, on the other hand, for people to transform their lives accordingly—including, in this context, for scientists to redirect their research.  Yet the 1970s critique of science was a key aspect of the context in which I first began to engage with the complexities of environmental, scientific, and social change together, as part of one project.”

c) The best of what I have achieved is…
• The syntheses presented in two books Unruly Complexity and Taking Yourself Seriously: Processes of Research and Engagement (2012).

• Innovation over 30 years in teaching critical thinking about science in its social context.

• An emphasis in all of the above on reflexive analysis of “the complexity [or heterogeneity] of resources or practical commitments involved in knowledge construction in any particular area.”

d) What has been particularly helpful to me in this project has been…
Being invited into or being able to organize spaces in which to experiment (see c), stretch the terms, find support from others on the margins, and recover when things did not work out so well.

“L&L’s politics is also one of considerable generosity to students and colleagues, even those who may have discounted their advice or moved away from the collectives they brought them into.”

e) What has hindered me has been…
• A tendency to position myself at margins, reinforced by my proclivity to learn by probing what others had taken as given (which draws me away from the centre of any field I am in).

• The counter-cultural context of the late 60s to early 70s dissipated in the 80s, but I did not think through the changed conditions as I continued to pursue the ideal of prefiguring the desired future in experiments in the present.

f) What I am struggling with is…
• Getting clear enough to be able to wake up each day feeling good about what I am going to focus on, which means not feeling frazzled by the many other things I allow myself to be or feel responsible for.

• A question asked of me recently by a younger researcher and activist: What do I do with my scholarship?

g) What would help me now is…

Apprentices (in some form) who would make demands on my time, care, and clarity and, thereby, help me address the issues I have been hindered by (e) and am struggling with (f).

Earlier posts distinguished several ways of defining and estimating interactions from data, presented a a case of apparent predator-prey interactions among ciliate species one might have expected to be competitors, and laid out differences among the many references to apparent interactions or indirect effects in the ecological literature. This post examines Levins’s loop analysis against this background.

Suppose that an ecological community has a feasible [non-negative] equilibrium, but that the equilibrium population sizes readjust to new values as the conditions under which the community operates change.  If ecologists assume that their observations of population sizes at different times are actually observations of population equilibria under different conditions, they can define the effect of one population on another in terms of their relative equilibrium values under the changing conditions—do they go up or down together, in different directions, or remain unchanged?  This relation between two populations combines direct and indirect effects, because it builds in the interactions among all the populations, not only the two in focus.

Levins’s method is as follows.  Suppose the change in conditions of the community—or, more generally, of any dynamical system—can be expressed as a change in some parameter, C, that directly affects the rate of change of one of the populations, X.  The change in the equilibrium values of each of the populations can be calculated using a complicated expression involving all the interaction and self-interaction terms in Model 2 and the partial derivative of the rate of change of X with respect to C (Levins 1975, 40).  This can be calculated exactly, even though loop analysis customarily uses the sign of the interaction terms only and generates qualitative predictions (which may be indeterminate).  Whether the two equilibrium populations change in the same or in different directions depends on the “node”—the population directly affected by a change in C.

In the context of a discussion of apparent interactions, the relevant question is whether hidden variables confound the values derived in loop analysis.  This can be ascertained by calculating the changes in equilibrium populations using a sub-community only and comparing the results with those calculated using the full community.  I investigated this question using the 5 population consumer sub-community of the 8-species web below (Taylor 1985, 150-153). 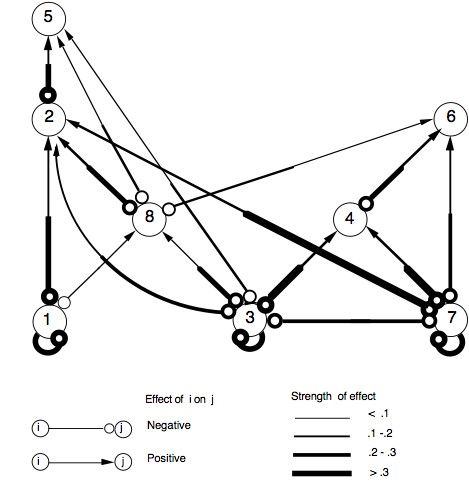 First, I generated loop analysis results using the direct interaction values for the consumer sub-community.  Unfortunately these were meaningless, because the predicted local stability was the opposite of what was correct.  Hoping to overcome this problem, I followed conventional loop analysis protocol and added qualitative self-inhibitory values to represent the hidden resources (Lane and Levins 1977).  The predicted changes were indeterminate in every case.  Finally, I used the apparent interaction values summarized in the figure below (see Taylor 1985 for calculation of the values).  Although the quantitative agreement was poor, the qualitative agreement was moderately good (see Table).

Predicted change in equilibrium value of population size of species

Introduction to my essay review of

Biology Under the Influence: Dialectical Essays on Ecology, Agriculture, and Health, by Richard Lewontin and Richard Levins, Monthly Review Press, 2007

In “A Program for Biology,” one of this collection’s thirty-one essays, the Marxist biologists Richard Lewontin and Richard Levins (hereon: L&L) list recent “big mistakes” in scientific approaches to complex phenomena: “the green revolution, the epidemiological transition [from infectious to chronic diseases], sociobiology, the reification of intelligence testing, and the current fetishism of the genome.”  They attribute such mistakes to the “posing [of] problems too narrowly, treating what is variable as if it were constant and even universal, and offering answers on a single level only” (p.81).  What they point to is not simply the “philosophical tradition of reductionism,” but also “the institutional fragmentation of research, and the political economy of knowledge as a commodity” (p.9).  Indeed, their critical position extends beyond science to rejection of “the greed and brutality and smugness of late capitalism” (p.373).

Their anti-capitalist stance notwithstanding, the foci or starting points of L&L’s essays, like their 1986 collection, The Dialectical Biologist, lies in research in the life sciences.  Regarding the green revolution, for example, L&L see:

…that a view based on unidirectional causation leads to the expectation that since grasses need nitrogen, a genotype that takes up more nitrogen would be more productive; since pesticides kill pests, their widespread use would protect crops; and since people eat food, increased yields would alleviate hunger (p.84).

The actual outcomes did not end up matching such simple causation because:

…the increase in wheat yield was partly achieved by breeding for dwarf plants that are more vulnerable to weeds and to flooding; the killing of pests was accompanied by the killing of their natural enemies, their replacement by other pests, and the evolution of pesticide resistance.  The successful yield increases encouraged the diversion of land from legumes.  The technical packages of fertilizers, pesticides, irrigation, and mechanization promoted class differentiation in the countryside and displacement of peasants (p.84).

“A Program for Biology” ends with three fundamental questions for the study of complexity:

The third question, rephrased in a later essay as “how [do we] intervene in these complex processes to make things better for us”? (p.115), invites… readers to ask what L&L’s essays tell us about having an effect—direct or indirect—on the complex processes of the production and application of scientific knowledge.  The essay review approaches this third question as it relates to social studies of science and technology and L&L’s contributions from four angles:

Indirect contributions—influences on and appropriations by other actors in the wider realm of biology as politics—are discussed as well as the more direct effects.

In a 2011 graduate course on “Gender, Race, and the Complexities of Science and Technology,” students were asked to add an annotated reference or resource (=person, organization…) to the evolving googledocs bibliography each week.  (Annotations were to convey the article’s key points as well as its connection to the student’s own inquiries and interests.)  The result is as follows: END_OF_DOCUMENT_TOKEN_TO_BE_REPLACED

This paper analyzes strategies of model building in ecology twenty years after Levins advocated the use of simple models to generate supposedly qualitative and general biological insights. Modeling has five aspects: elevation of biological processes, construction and analysis of the model, and of observations, analysis of correspondence between the model and observations, and model-based action. I distinguish four different roles we can assign to models: schemata, exploratory tools, redescriptions, and representations of generative biological relations. In the analysis of correspondence fidelity of fit and accuracy of predictions are insufficient evidence that a model represents the biological processes that generated the observations. In order to confirm the model a variety of “accessory conditions” need to be established; these are often overlooked and difficult to establish, especially in the case of simple models of naturally variable situations. I reinterpret the strategy of using simple models in community ecology as exploratory. The simplicity may ensure mathematical generality but not ecological generality; the models are only suggestive of — not support for — ecological hypotheses. Generality in ecological theory will require much more particularity.