Take Home (from a presentation at Cambridge Science Festival, April 2012)
Many Knowledge claims in this area invite: 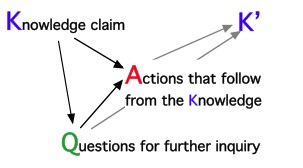 Suppose you are a doctor seeing a patient with hypertension.  The patient is a 54 year-old black man.  What should you do?  What more do you want to know before deciding what to do?

K: The patient is a 54 year-old black man.  A: What should you do?  Q: What more do you want to know before deciding what to do?

K: Perhaps you already know more along the following lines:

A: You might say to yourself, “I know that not all black men with hypertension do better with calcium channel blocker and worse with beta blockers, but on average they do.  So I’ll prescribe diltiazem and see what happens.  If it doesn’t work well, I’ll change the medication.”

Q: But you might also say, “I want to know more about this black man and learn to make decisions not simply based on averages.”

If so, let me trace two paths of learning more that you might follow, first around racism and second around ancestry.

K->Q: You may know that not every man that looks black identifies as African-American, so you might first ask if he does.

K->Q: Even if he doesn’t self-identify that way, you might think, “Given his skin color, he may have experienced racial discrimination.  Let me ask him whether he has.”

K->Q: You may know that self-reports of experience of racism are conditioned by class, so you might look for and use a survey that is better at probing beyond self-reports.

K, A: You might, however, think, “Having someone answer questions on a survey and then interpreting the results takes time and the insurance company doesn’t reimburse me for that time.  What would I do with what I learn, anyway?”

K: After all, it’s implausible that experiences of discrimination have no physical effect on our bodies and it’s plausible that these effects might add up over time to produce differences in ways that bodies are hypertensive.

K, Q, A: “OK,” you might say, “I’m interested in this line of inquiry, but I won’t start asking my patients about experiences of racial discrimination until researchers have shown clear associations between experiences of discrimination and the subjects’ responses to the various hypertension medications so that I know what anti-hypertension medicine would work best.”

K, A: Understandable that you say this, but instead of waiting for such results, you might do some reading after hours about the positive effects of acknowledging the topic of discrimination and, conversely, of pride in one’s identity.

Now let’s shift to the ancestry line of inquiry:

K->Q: You may know that not every man that looks black identifies as African-American, so you might first ask that.

K’: You might discover that he is an immigrant from Africa, not a descendant of slaves in the United States.

K->Q: Either way, you might know that genomic studies are starting to identify some genetic variants of biomedical significance that are more common in people of specific areas of Africa (e.g., Genovese etal. 2010).   You might ask, “Does your ancestry trace back to region X?”

K: There is a good chance that African-Americans won’t know this, or won’t know their places of ancestry with enough precision to be helpful, or will have multiple places of origin in Africa.  K: Moreover, if he is a descendant of slaves, you know he has probably has a lot of European ancestry.

Q: “OK, we need to do a genetic test to see if he has the genetic variant in question.”

K: But, on second thoughts, doing the test is expensive and the insurance company doesn’t reimburse me for that.

A->Q: In any case, what would you do with what you learned from the test?  Has any genetic variant been associated with one anti-hypertensive medication being more effective than the others?  Or is it simply telling us that the population of African-American men as a whole (meaning the population on average) has higher risk when they possess that variant?”

Q: Yet, if researchers collected more data about ancestry (which, given people’s imperfect knowledge of their ancestors, would probably require genetic markers) then researchers could assess whether there was an association between ancestry and responses to the different hypertension medications.

Q: But you might ask, “how plausible is it that such associations will be useful for clinical decisions, or even for further research?”

K->A?: You might ask this because you know that Genome-Wide Association studies “have not found common genes with a big impact on heart health” (Couzin-Frankel 2010).  There is heated debate about whether to “hope that the low-effect genes they are finding will help identify pathways and drug targets.”  (“Low effect” here means much smaller relative risk than between modifiable aspects of diet and behavior.)

Q: “OK,” you might say, “I wonder if I should be interested in this line of inquiry?  Let me see if anyone can show me what considerations I’m overlooking.”

K: Now, let me note one thing that has been put aside in this exposition of the two paths.  The Cushman study showing differential response to medication between blacks and whites was actually a study of differential responses to medication inside versus outside the “stroke belt,” that is, the “12 states with stroke mortality rates more than 10% above the mean rate for the rest of the United States: 10 of these states are in the south- eastern region.”  The authors conclude:

Q: Perhaps the first questions a doctor might ask is “Do you come from the Stroke belt? Do your parents?”

K: In their spare time the doctor might learn about the competing theories for the existence of this belt (e.g., Howard et al. 2010, Kuzawa and Sweet 2009).

Kuzawa C. and E. Sweet (2009), Epigenetics and the Embodiment of Race: Developmental Origins of US Racial Disparities in Cardiovascular Health. AMERICAN JOURNAL OF HUMAN BIOLOGY, 21(1); 2-15.